After setting up a new iMac for my mother (

music4fun) last weekend, I liked it so much that I went and bought one of my own. You can see it below, next to my old clunky Gigaware keyboard: 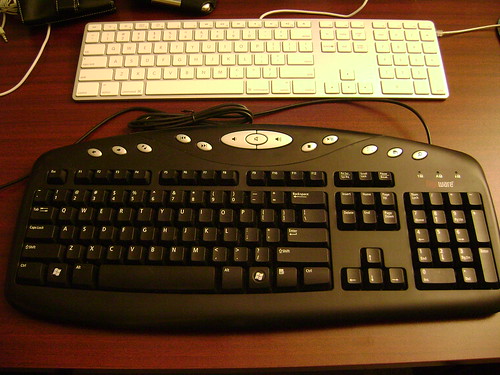 For starters, the keyboard takes up less desk space than my old keyboard. Also, there are two low power USB ports on the underside of the keyboard, which let me unplug my mouse from the back of my iMac. (Yes, the Gigaware keyboard really did not have USB ports on it)

If you look closely at the function keys, they have symbols on them for common desks, such as starting/stopping music, firing up Dashboard, etc. I have no idea if these work on a PC (I'll test at the office soon), but it works great on my ancient G5 iMac. And it seems stupid, but I actually find myself making use of these keys because they're so darn convenient.

The keys are very short. Whereas the average keyboard has keys that stick out of the keyboard up to 1/4 of an inch, I measured these keys, and I would say they're closer to 1/16th of an inch. If you're a fast touch typist, this is a big boon because less effort to press each key == faster typing speeds.

The gaps between the keys are almost non-existent. This is awesome if you're like me and eat meals at your desk. No more nasty crumbs that fall between the keys and cause nasty things to come out when you turn the keyboard upside down and shake it. (No, I've never done that to co-workers, why do you ask?)

Something that takes getting used to is the fact that the keyboard is very low to the desk. I'm used to "feeling my way across the keyboard" because it's so high from the desk. With this one, it's much more difficult to do that. However, I found myself adjusting to the height difference even while typing this post. 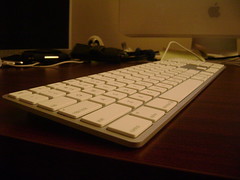 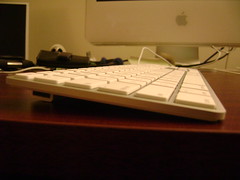 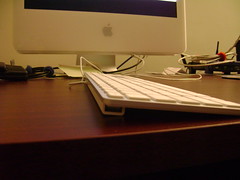 The Apple Keyboard currently sells for $49.99 and can be snagged from Apple's online store, or at any of their physical Apple Stores.
Collapse